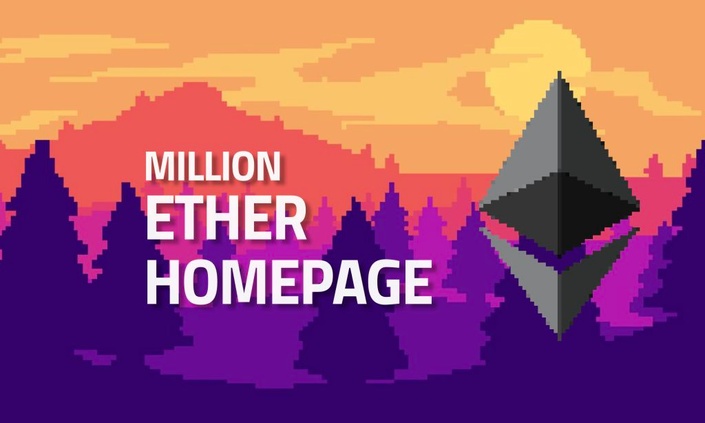 In this course, we’ll build a DApp inspired by the Million Dollar Homepage. We’ll build a 1 million pixel page, and each pixel can be colored by placing the highest bid.

In a Wiltshire England a young student named Alex Tew was about to begin school at the University of Nottingham.

Alex didn’t have a lot of cash, so like a lot of students he was going take out loans to pay for his education. But the high cost troubled him.

So he sat and brainstormed ideas and something struck him.

“I was broke. I needed money.
I thought, what could I do, I know I’ll sell pixels for 1 dollar each.
That could work.”

Alex’s idea was to take a website and sell the pixels for 1 dollar each. If he sold all of the pixels, he’d end up with a million dollars.

He told all his friends and family, and managed to sell $1,000 worth and used that money to issue a press-release.

“It was picked up by the BBC and some UK newspapers.
Then the next day it made another thousand, and then two thousand, started overnight
and once the ball started rolling, it was like the snowball effect”

In four and half months the page had sold out.

But it wasn’t all rosy, during the auction of the final pixels, there was an extortion attempt where a group demanded $50,000 dollars. Alex didn’t pay and they initiated a DDoS attack that brought down the site for a week.

The attack eventually subsided, Alex sold the final pixels, and the Million Dollar Homepage is still with us today.

In this course, we’re going to build a version of the million dollar homepage as a DApp on the Ethereum blockchain.

Alex used PayPal to process his payments, but our payments will come directly through Etherum.

Alex’s site was brought down by hackers. Our pixels will live on the blockchain and there’s no way for attackers to bring them down.

Alex put his pixels up for auction on EBay – we’re going to auction our pixels directly in an Ethereum smart contract.

I want to be clear here. I’m not trying to convince you to build a copycat site or try to get rich quick by a million ether page.

Instead, the Million Ether Homepage is a perfect introductory decentralized app, because it touches on many key ideas that we can bring to other Dapps.

For example, in building this app, we’ll talk about

This course is for beginner Solidity programmers. We walk through every step on how to build a Million Ether Homepage Dapp – from an empty folder to the blockchain.

If you want to learn the practical steps to building a full-stack Ethereum DApp, then this course is for you.

Alex sold his million pixels. And he seemed as surprised as anyone that it worked.

“The internet is the perfect place for crazy ideas”

Let’s get started, by looking at how we store pixels on the blockchain.

When does the course start and finish?
The course starts now and never ends! It is a completely self-paced online course - you decide when you start and when you finish.
How long do I have access to the course?
How does lifetime access sound? After enrolling, you have unlimited access to this course for as long as you like - across any and all devices you own.
What if I am unhappy with the course?
We would never want you to be unhappy! If you are unsatisfied with your purchase, contact us in the first 30 days and we will give you a full refund.
off original price!